And then hell froze over.

Posted by Amber Teasdale in Stuff and Things on March 8, 2012 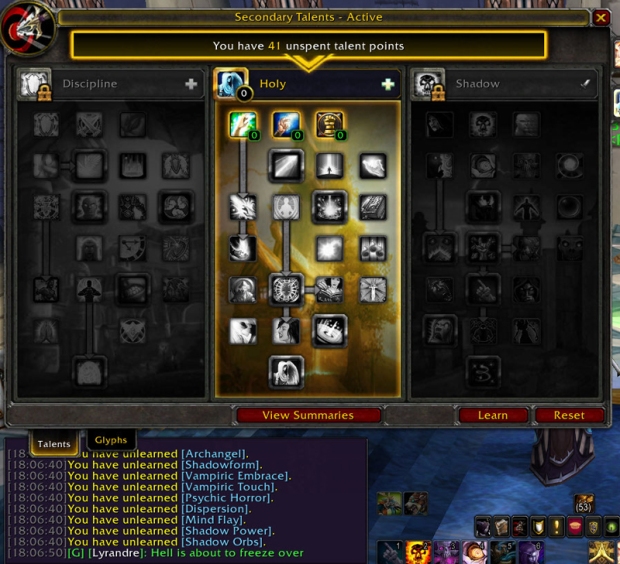 Posted by Amber Teasdale in Stuff and Things on June 9, 2010

I was slogging through my feed reader earlier when I came across 2fps’s post here.

I can’t comment while I’m at work and I’ll forget by the time I get home, so TIEM FOR POST.

Way back in BC when my guild was faltering on Gurtogg Bloodboil I talked to the healing lead about possibly speccing into a deep Disc build for Pain Suppressioning our clothies on the Fel Rage. … Of course, nothing came of it because Holy was such a powerhouse by comparison.

Wrath launched and it seemed like Blizzard was listening to my stump speeches because Disc suddenly blossomed into a real true healing spec competitive not just with its Holy counterpart, but with any other healing spec from any other class as well.

The unfortunate fallout of this otherwise awesome turn of events is that so many priests have completely forsaken Holy altogether. …

Here’s the thing: despite your objections and your hot displeasure, Holy actually is a great healing spec with a ton of awesome tools to bring to the table and you’re only gimping yourself and possibly your raid by sticking with vehement denials.

One of the BoO “catch phrases” is that Real Priests Are Holy.  Of course half the reason anyone says this is to get my goat, but I am the only disc priest main in the guild right now.  If holy has now become maligned amongst the general populace I am certainly uanware of it.  It’s also silly.

One issue hindering the disc priest is that we don’t “stack” well.  You can have three holy priests in a raid.  Have you ever tried to raid with 3 disc priests?  If you are going with the raid Bubble trend, then what you have is three priests sniping bubble targets from each other and generally going insane.

I don’t think that many holy priests turned away from their specs–not entirely.  Instead, I think there’s several priests out there sporting both specs.  Disc, for its many useful properties and holy for its…many…useful properties.

The biggest bonus to disc, though, is that I don’t have this big shiny announcement to the world when I fuck up and die.

Why Disc Is Totally Awesome And Holy Is Not

Posted by Amber Teasdale in Stuff and Things on September 15, 2009

(Disclaimer: I love holy priests, just not being one.)

Posted by Amber Teasdale in Stuff and Things on September 15, 2009

See that?  See that fail angel?  THAT IS NOT ME.  BECAUSE I AM NOT HOLY.  THAT IS KY BECAUSE KY IS HOLY BECAUSE HE DOESN’T KNOW ANY BETTER.

Holy is a great spec and all, and I love holy priests, but I AM NOT ONE.  I tried and lo, it was terrible for me, and I all but pined away.  I must have the bubbles, so I can make the raid shiny.

NO FAIL ANGELS HERE.  NOPE.  NONE.