Posted by Amber Teasdale in Stuff and Things on May 23, 2012

I think it’s past time to close up shop here at ILB land. I don’t have a lot of WoW talk to share these days, and despite making an attempt or two, can’t bring myself to blog non-WoW stuff here, either.

But fear not!  You can find me over here form now on, instead. I promise I will still toss out the occasional flowchart, the content will just be a lot more…random in topic.

My Life As A 75 Resto Druid, In A Nutshell

Posted by Amber Teasdale in Stuff and Things on January 11, 2012

This is how bear became my off spec. It might be time to revist that…

Um, how do you bear tank again?

adventures in Looking for Douchebags, altitis, Druid, I am the only rest druid who doesn't miss tree form, let's make up new tags, pugs make me cry inside, what is this I dont even

Advice For Venturing Into LFR

Posted by Amber Teasdale in Amber Tries To Be Helpful on December 14, 2011

Disclaimer: I’ve had a whopping one whole LFR run.

I wasn’t really planning on hitting the LFR. The LFR was scary, after all. I just wanted to do a couple of heroics for VP, but then a bunch of guildies wanted to go, sooo…sure, why not?

Bits of Advice:
-Don’t go with absolutely no clue of what to do, unless you’re confident in your ability to figure it out on the fly.  Watch at least the 10 man videos first (even though it’s 25 man), just realize that a lot of aspects of the fight will sort of fly out the window. I say this becuase I went into it cold, and when I asked what each boss did, I was told to figure it out. When I tried to read the dungeon journal, they pulled the boss. You might get someone who explains, but don’t count on it. On the other hand it’s not TOO hard to figure it out on the fly if you’ve been raiding awhile (at least, for the first 4)–I only died once, I swear! Just follow the other nubs when it seems like they are running away/towards something. Baaaaa.

-Don’t even bother to hope for loot. No really, don’t even bother. There’s 24 other people derping along in there with you, and you’re better off saving your sanity and assuming you’ll get nothing. Becuase you probably won’t.

-While you’re at it, don’t even look at damage meters, especially after you’ve lost loot. The person who won it will be terrible. That’s just how it works.

GnomeClone Adventures: Things That Piss Me Off

Posted by Amber Teasdale in Stuff and Things on November 15, 2011

So far, being a Gnome Clone–at least, when among other Gnome Clones–has been delightful. I dinged 24 last night and now begin assembling the gear we’ve decided on. Since we’re going to be dipping our toes in the water of instances a wee bit ouchy to us for some of the gear that we need, I’ve been trying to assemble the best gear that I could along the way, but I’ve…be having trouble with that.

The only way to guarantee that you get a drop from an instance should it appear is to go in a full guild run. That’s just the way of things as far as I’m concerned, if I run it with pugs I always risk the chance that another member of the party will need it and win the roll.

That’s the thing though: I stand a chance of that happening. But I’ve experienced something…annoying.

You see, I’m re-discovering (gasp!) that people are assholes. Over fucking lowbie loot.  More than once now I’ve grouped with people who are all from the same guild/server, and each time they thought it was fine and dandy to all roll on loot I was trying for and give it to the priest/mage/whomever among them that really wanted it.

Seriously, guys? It’s a piece of fucking lowbie gear and all 4 of you are going to roll on those cloth shoulders?

Why don’t you just go fuck yourselves up the ass with a pine cone while you’re at it?

adventures in Looking for Douchebags, fuck is an awesome word, Gnome Clones, I forgot I had some of these tags, I hate people, ITS FUCKING LOWBIE LOOT, let's make up new tags, OMG CAPS, seriously what the fuck, this post needs more tags, well fuck you too

I bet you thought I didn’t do these anymore.

Posted by Amber Teasdale in Stuff and Things on November 4, 2011

Posted by Amber Teasdale in Stuff and Things on September 29, 2011

Murphy’s Law states that if we have a new recruit along–either one thinking of joining, or one who just shelled out good money to transfer on the grand assumption that we don’t actually suck–we will, in fact, suck. At least a bit.

Of course the poor guy gets his first run with us on a night when we’re intentionally wiping on bosses for legendary shenanigans, so that’s splendid. Welcome to the guild, have some repair bills*. But theeeeen we proceeded to wipe on trash.  Three times.

“I’M BRINGING HOME A PUPPY.”
‘Shit, where did these scorpions come from?”
“AMG ANOTHER DOG.”
/raid splatters

….x2. Add in some fun with the fire elemental gauntlet and, well.

WELCOME TO SIB, WE WIPE ON TRASH.

SiB can’t be the only guild afflicted with this curse, though…can it?

A Few Thoughts On Tyrande

Posted by Amber Teasdale in Stuff and Things on September 28, 2011 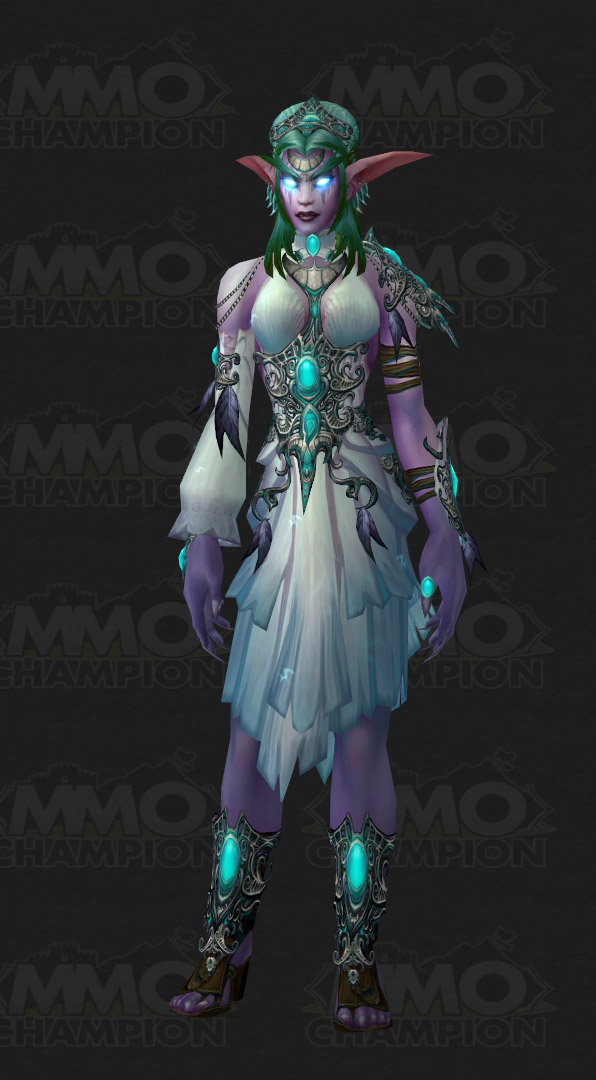 2) ….high heels?  I have this raging hatred of high heels in fantasy becuse they are moronic and impractical. The world has gone to shit, Deathwing is on the rampage, and Tyrande is in high heels. Whyyyyyyy? I don’t expect her to be in full battle regalia all the time, but soem practicality is still in order, don’t you think?

3) What’s with the claw-nails? She’s a priest, not a feral druid, unless Malfurion likes clawing during sex–and I don’t know, he might. Kinky ass druids.

4) It’s not a mini-skirt and her stomach isn’t exposed. She manages to have pretty clothing without looking like a whore!  Yaaaay!

5) …the more I stare at her feet, the more I think someone’s drawn too many trolls or something. Is it just me, or does the second toe look as big/bigger than the, well, big toe?

6) WHERE IS HER RIGHT HIP/THIGH?

Seriously though: the nit picky things are mostly drowned out by the fact that she is even GETTING a new model and IS WEARING MORE THAN A SCRAP OF FABRIC.

Why yes, I have lowered my expectations in general.

Posted by Amber Teasdale in Stuff and Things on August 22, 2011

I’ve been doing my best to level Lyrandre with something resembling haste, which has lead to me being terribly bored of smiting.

This is where you’d say Amber, isn’t Lyr dual specced?

Yes, yes she is.  Disc and nothing.

…what do you mean I should use that second spec for shadow?  Pffft.

I’ve hit 84 and the dreaded Twilight Highlands, which means that I will be a paper armored smear on the ground several times from here on out. Woe.

My pugging experiences have been mostly good, until I got one of Those Tanks the other day. He was in partial casting gear (BARE tank, I’m guessing moonkin otherwise) and at one point–after I nearly died on the first trash pull–I made him aware that hey, untanked caster mobs tend to eat the healer.

He said that was fine. He was invincible!

No really, he said that he didn’t care if I died because he was invincible.

By the time I hit 85 the rust should be completely, brutally knocked off my healing skills…

Posted by Amber Teasdale in Amber Tries To Be Helpful on July 19, 2011

Note: I am not very PC when it comes to this sort of thing.  I freely throw around words like cunt, etc (in case you haven’t noticed).  If this offends you, you…might not want to read this post.

First, start with a body part. Obviously the “naughty” parts work the best for this, though “face” also has many applications. I use parts regardless of the gender of the person I’m insulting.

Then, take your ‘part’ and smoosh it together with another word.  Often this word is random, though everyone has favorites. Face is one of those words that can pull double duty and go on this list, as well.

If you’re really cheesed off, you can always try adding descriptive words like “flaming”.

Amber is silly, eat a fucking muffin, FUCK FUCK FUCK, fuck is an awesome word, I didn't have enough tags with cuss words in them, let's make up new tags

How I Drive My Raid Leader Crazy

Posted by Amber Teasdale in Stuff and Things on July 11, 2011

Discussing how we’re down to 4 healers and another one “would be nice”, and me possibly leveling my priest:

me:  Priest, not paladin?  C’mon, heal a raid with nothing but paladins, GO
Fuzzbutt:  Wha?
me:  /points at her healers at 80
Fuzzbutt:  What’s wrong with priest? I thought you HATED pallies now?
me:  THEY DIDNT HAVE AOE HEALS THEN
Fuzzbutt:  But holy power is still around.
me:  But it was mostly tongue in cheek, I vendored all of Ambro’s healing gear.  Haha,.
With Lyr I can LFD ALL THE THINGS isntead of questing >.>
Which is how i prefer it
Fuzzbutt:  Lol
Srsly though, it is ONLY if you want to.
I’m really not gonna make anyone do anything
me:  I am not burned out on healing ala Myss.
Fuzzbutt:  Yes I know this
But I also know you like your DK (last I checked?)
me:  I will start leveling her as best I can, but if we get a healer replacement first I won’t be butthurt either.
I do!
And I like my hutner now that I have kind of foguredo ut focus things
but!
I will play…whatever
Fuzzbutt:  Do you actually WANT to heal?
Or are you just willing to, to reduce my headache?
me:  I will happily heal if we need me to.
I will jsut as happily keep melee DPSing, too.
Fuzzbutt:  THAT doesn’t answer my question
me:  I WANT to heal about as much as I WANT to DPS, thus making it equal
Fuzzbutt:  Technically. I don’t NEED you to
I have 4 healers and should be able to rotate alright
me:  WELL I WILL LEVER HER ANYWAY AND WE’LL SEE WHAT HAPPENS
Fuzzbutt:  Lever!
me:  damn it
shut up and go to bed
Fuzzbutt:  Lol
I’m just saying amber
I want you to play what you want to play. Not what I may need you to play.
Its not how we operate. I’m not going to start now.
And your little non-answers just make me feel like you’re doing it cause I want you to
me:  Seriously, dude, I DON’T CARE
I WILL PLAY WHATEVER THE FUCK
just not ret pally oh god
or rogue
…or mage
unless someone powerlevels me through maging
becuase I have no idea
SCORCH ALL THE THINGS OH GOD I DIED
Fuzzbutt:  YOU’RE NOT HELPING GODDAMMIT
me:  BELIEVE ME WHEN I SAY I DON’T CARE
Fuzzbutt:  /Flail
Its hard to believe that when you had no interest in it until I brought it up the other night
me:  I DONT HAVE INTEREST IN CAKE UNTIL SOMEONE MENTIONS IT EITHER

abusing my GM powers is fun, did someone say cake?, Fuzzbutt has a tag, let's make up new tags, man I'm glad I gave someone else that job! Officers are great!, one of my GM powers is driving everyone crazy!