Posts Tagged Murphy and I are good friends

Posted by Amber Teasdale in Stuff and Things on April 8, 2011

I forgot to crop it, apparently.  Oops! 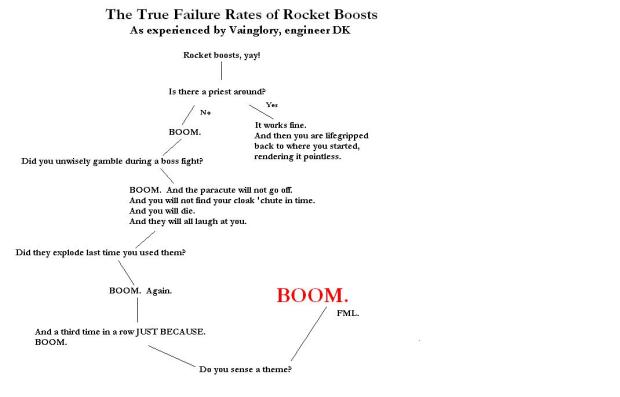 flowchart friday, Murphy and I are good friends, the real point of engineering is to provide you with more ways to die

Posted by Amber Teasdale in Stuff and Things on September 16, 2010

It’s always been a theme that if there’s an alt I’m interested in, the guild will promptly fill up with that just class/roll.  At one point BoO had few hunters and many priests, so I started to get my hunter up to speed…

…and then we had a bunch of hunters, so she went back in her box.

And then we were shy tanks some times, so I tried bringing Ambrosine up to speed, and then…we had many tanks!

Regardless, I’ve vaguely wanted to tank and been mostly unable to for one reason or another (can’t justify an alt tank with 4 main spec tanks now can I?).  Last night, however, things changed.  I was TANKING!  We down Marrowgar and I’m handing out loot and…

…the severs went down.

The fact that I was tanking brought about such a disturbance in the Force universe that is must have disrupted one of the Chicago data centers!  For greater irony my primary servers are in Ruin AND Vindication, so I lost BOTH of them!

While checking the forum thread for info, I made sure to post helpful commentary.

Image ganked from Kerrsplat becuase he beat me to cropping it. Ha.

altitis, Amber tanks things with her face, Murphy and I are good friends, wtf

Posted by Amber Teasdale in Stuff and Things on June 25, 2010

If I was smart I’d save the other funny for next week, but I’m too amused by it now to wait.

Amber loves MS Paint, damn mages be taking my loot, dear god do I love tags, flowchart friday, I hate you all just so you know, let's make up new tags, Murphy and I are good friends, this post needs more tags

Murphy’s Law of Alting to Help the Guild

Posted by Amber Teasdale in Stuff and Things on June 18, 2010

Murphy’s Law of Alting to Help the Guild:
The Inevitable Cycle of Guild Composition

Let’s say…you’re a priest.  You enjoy priesting, but you also like to have a well prepared alt to help the guild out in case of Wonky Composition Nights, so you start prepping one that you adore playing.  Alright, so secretly you relish the idea of raiding as another toon sometimes.  You REALLY hope that you’ll get to use your alt at least SOMETIMES.  Anyway.  So let’s say you’re readying a hutner, because your guild is actually really low on hunters.

Just about the time she’s ready, suddenly your guild has 5 hunters.

Oh, well, there’s pugs and stuff, right? Back in the back for now, hunter.  So you go along and soon it seems that your guild is always running short on tanks.  They mysteriously vanish during anything but raid times, and it would be cool to help with off night raids and stuff.  So you get your tank ready to go and…

…suddenly your guild has more tanks than they can shake a stick at.  Not only mains, but also alts, becuase it seems like everyone else in the guild had the same idea you did.  And they’re all paladins.

You keep on priesting.  Suddenly a lowbie alt of yours catches your fancy and next thing you know, you’re plugging away at a druid.  Your guild actually has a dearth of druids.  Oooh, could this be your new Cata main?  What a thought!

Just as she hits that nearly Northrend home stretch…

…half of your newest recruits are druids, of the 2 specs you favored, and you don’t need any more.

…all this has actually happened to me.  How about YOU guys?  :P

altitis, bitch moan whine, let's make up new tags, Murphy and I are good friends, ramble, this is not a flowchart