Posts Tagged Oasic has a tag

Posted by Amber Teasdale in Stuff and Things on October 28, 2010

…and with it, NaNoWriMo, and a month long silence on this blog.

At least, from me.  Unless I fail, of course, then it’s a whole ‘nother ballgame…but anyway!

Guest posts!  I want them!  Topic is largely irrelevent as I’ve covered everything from priests to pallys to hunters to DKS to raids to RP here by now.  Flowcharts are a bonus.

My e-mail is over there in the side bar…send away!

Cel gets a tag!, dear god do I love tags, Fuzzbutt has a tag, heres a tag, I need more tags about tags, I think I've gone crazy with the tags, Jill was bitching about not having a tag, Kyr is a tag whore, let's make up new tags, Oasic has a tag, tag, theres a tag, this post needs more tags, why is it called a tag?

Posted by Amber Teasdale in Stuff and Things on March 18, 2010

One time we were doing ToC25, and my little sister was killed by Icehowl’s charge.  I openly mocked her, as was my sisterly duty.  The very next time Icehowl charged, I died to it.

Did I learn from this karmic retribution?

Last night we were clearing our way to Rotface, and we pulled one of the puppies.  The puppies are always a bitch for reasosn unknown…no wait, I do know.  We’re the guild that wipes on Gunship while one shotting everything else in Lower Spire-of COURSE the mini bosses are hard.  Anyway.  I see a tell-tale fail angel and teasingly tell the priest in question, Oasic, to Desperate Prayer more.

You see where this is going, right?  Of course you do.

AS MY PTT BUTTON IS STILL DOWN, AND I AM STILL TALKING SMACK, I died.

Mad skills.  I have them.

Amber is a dork, Fail Angel, Guild Big Sister, I r teh fail, in which I mock people, Oasic has a tag, Priest

Posted by Amber Teasdale in Stuff and Things on November 23, 2009 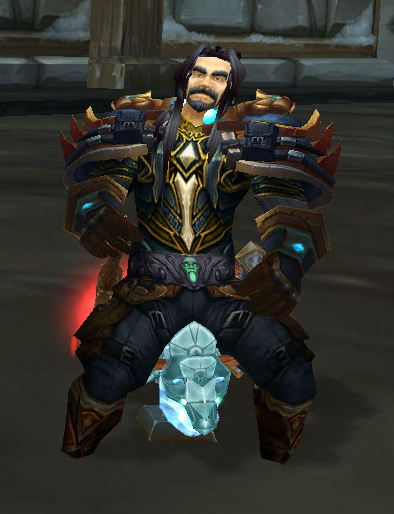 This is what happens when you baby spice someone on a Sandbox Tiger, they dismount, and a normal sized person gets on… 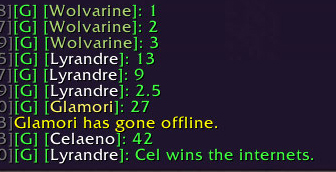 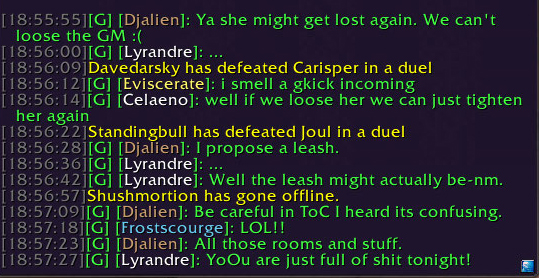 Fucking DJ.  Don’t listen to him, he’s so full of shit I made a new rank called Twilight Fan to demote him to.  And yes, it was muted.

Amber is a dork, damn it all to hell DJ, Kyr is a tag whore, Kyr is more of a dork than I am, Kyrilean is an enabeler, Oasic has a tag, ss or it didn't happen, the disc priests dont love you, things we say in the healer channel

The Life and Times of an Alt Whore

Posted by Amber Teasdale in Stuff and Things on October 21, 2009

So I’m on my priest, wandering aimlessly around  “>Dalaran, in LFG for…some raid or other I don’t need to save for the guild.  I haven’t pugged a raid in aaaages.  Naturally they ask for my gear score-what the hell?  I don’t know what that is.  I settled for linking the achievement showing I’ve done it already.  I get invited and then…

…kicked for a guildie.

Kay.   They apologized, whatever, all good.

Next I see them asking for a pally tank.  I go, lol, I haz pally tank.  They say, okay!  So I switch toons and…

…oops they filled the spot.

…so then I flop over to my mage, and fart around trick or treating my way through 57.  Oasic asks me to tank the heroic daily.  Okay!  I flop over and…

…oops, nevermind, he has to do something else before raid time.

…I flop over to my hunter.   She still doesn’t have the rep for her helm enchant, fail!  la la la, Ebon Blade dailies, la la la, oh hey a heroic.  Let’s go do a he-

Fffffsssssssss.  Originally they want a healer and a melee DPS-Lyrandre and Drake sound perfect, but I guess we’re doing ToC10 tomorrow?  Why the fuck are we doing 10s when we were just doing 25s?  What the hell is wrong with you, Steve?  …anyway, so Lyr is on reserve for tomorrow.  So that left the Most Fail Ret Paladin Ever, or my hunter.  Hunter it was, with Josh’s holy paladin.

…my hunter, bless her undergeared BM heart, ended up #2 on Damage Done.  lolwaitwhat?  All of our DPS was sub 3k.  Since I’ve seen all of us, myself included, do more than that…so I can only tilt my head and figure that group synergy just wasn’t there.  It was definitely a pulled together group thanks to Steve forgetting it was his mother’s birthday (FAIL) and we ended up giving up on FC.  I had fun, though.  I wish I had the time and luck to give my hunter some more attention.  My pet didn’t die even once! \o/

It was actually hilarious when our beartank summoned me and then said something along the lines of, “Wait, what the hell?” at the sight of my trusty devilsaur, Omnomnom.  “Please tell me you’ll be using another pet.”
“NOPE.  That’s it.  All dino all the time.”
“But he’s huge!”
Josh, resignedly: “You get used to it.”
Andy: “But it’s funny because when he dies she’s all, Noooooooo, Omnomnom!”
Which I totally do.  But anyway.  Good times.  Poor, unwitting bear…

In good news, we’ll be assembling an off night Ulduar10 to complete the instance.  Fuck gear, this is for those of us who want to say “I did Yoggy.”   We will extend the lock out into eternity until he dies.  Amber Approves.

I’ll be looking at tweaking my disc spec tonight, and perhaps I’ll post a report on how that whole heavy sp/crit thing is going, for those of you interested in the nuances of disc stats.  Not that I’ll really discuss nuances, mind.  I’ll just be like “here is what I do and look, I’m not failing yet.”

Random note: by the end of the night, I had spent time on 4 different characters.  :P

altitis, Amber goes pew pew, Oasic has a tag, pugs make me cry inside, ramble, Trial of the One Room Raid

Posted by Amber Teasdale in Stuff and Things on October 14, 2009

Brief Tanky Ramblings
Normal ToC decided to like me and cough up my tanking trinket.  Woo!  …now to run it some more for the DPS trinket.  Pffft.  And then some more to get said trinket for ME, because Josh wants said trinket as well on his DK.

Thankfully I had enough defense to drop my Seal of the Pantheon for it, and keep the dodge trinket.  I’m also now FINALLY over 30k health in 5 man buffs.   Yay!  Hopefully she’ll get some more goodies in the Naxx25 run tomorrow (that I’m leading?  What?  NO!  *hands to Josh*).  Then I can set her back into her primary alt slot and…

…work on my hunter?  Alas, no.  Jamethera is stuck as the bastard red headed stepchild of my alts.  No, friends, I want to work on my shadow priesting some more.

PTR Changes
Stolen from Duct Tape and a Prayer because I can’t access the official crap:

…granted I still do less DPS than most of our other shadow priests (HOW?  MUST FIX) but YAY!  Now we get to cross our fingers and hope these changes don’t get nerfed back into the ground by release time.

Also, I find it terribly ironic that spirit is well-nigh useless to me as a disc priest but…it appears that I want some as shadow.  What?  Damn you. blizzard, for complicating my two sets of gear!

Oasic, how do you beat me as shadow deeps?  I MUST KNOW.

…oh they also made it possible for you to bubble nonraid/party members.  Sweet! Thanks Blizz!  Now I can run circles around Dalaran randomly bubbling people!  YAY!*

*I may or may not be genuinely excited by this development.

Posted by Amber Teasdale in Stuff and Things on September 30, 2009

I love my guild.  I bitch about them, sure-we have this collection of some of the most derp derp people ever-but they’re adorablederp derp people.  Hell, sometimes I am one of those people (see: walking into Vezax trash).

We’re all so delightfully nutty.  Sometimes perhaps not so delightfully, depending on how funny you think talking about poop on vent is, but you get the idea.  Last night, we assembled our first 25 man raid for awhile-on an off night!  So we trundled on over to Ony and I proceeded to make my usual threat, just tweaked slightly for the instance:

“If you get tail whipped into the whelp caves EVERY BLOGGER in the guild will post mocking you!”

Considering that there’s uh…five of us?  Yeah!  That threat carries five times more weight than before!  Of course, 5 x 0 = 0 still but whatever.  :P

We never did down Ony (a post in and of itself), but it was nice to have a full 25 man run again.  We’re almost there again!  I just need recruit people to shore up our weak spots, and we should be able to resume our 25 man raiding.  Now if I can just get the people we have to not stand in bad places (says the priest who ate part of a deep breath or two-BUT IT DOESN’T COUNT IF YOU DON’T DIE).

It’s also really hard to be frustrated with your GM when he replies to your complaints of “You never listen to me, Steve!” with “That’s not true!  I listened to you once like, 7 or 8 months ago!” and then proceeds to go on about how he wants to be portrayed as an evil dictator, or something.   Fine, Steve, I can help with that! I have this whole collection of tags for you already!  :P  And then Ky complained that his tag wasn’t big enough in my tag cloud, and…

See what I have to deal with?!

I may not be doing hardmodes, I may not be on the bleeding edge of raiding, but I’m having fun with a lot of awesome goofballs.  Even if the GM is a meaniehead, and decided to play his priest when we could practically comprise a 10 man raid of just priests…

I call disc priest tank, yo.