Posted by Amber Teasdale in Stuff and Things on January 5, 2012

ETA: If you can go into a heroic in pvp gear and do 15k DPS, this post is not about you.  Also, there’s a line between “I am a PVPer stepping into PvE content” and “I’m a PvEr who bought these blues off the AH when I dinged 85 and didn’t bother to reforge, gem, or enchant anything, so that I could have random people carry me through heroics.” It is the latter who have sparked my ire.

Look, I realize that using PVP gear to cheese the ilevel requirements is a quick and easy way into the new heroics. Really, I do–see my own pvp shoulders?  But please understand one thing: the heroics themselves will not be quick and easy while you’re limping along doing less than half of the DPS of everyone else. 9k is not an acceptable amount of DPS.

You can’t count on some uber DPS trying to cap VP coming along and carrying your sorry, lazy ass. Murphy’s Law states that you will be tossed in a group with all or one of the following:

And then things won’t die fast at all and your healer will run out of mana healing these super long fights while the 2 fps guy stands in bad and OH GOD THE PAIN WHAT THE FUCK IS WRONG WITH YOU?!

Newsflash: the normal heroics are STILL IN THE GAME.

Get some other heroic loot and some JP stuff and then maybe, just maybe, you can fucking SUPPLEMENT your shit with pvp gear to cheese the last bit of ilevel, okay?

BUT YOU REALLY CAN’T WEAR JUST PVP GEAR AND NOT MAKE ME WANT TO RIP OUR YOUR ANUS VIA YOUR THROAT. 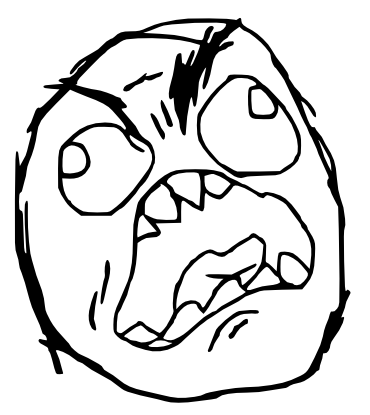 Angry Healer's Club, looking for douchebags, OMG CAPS, open letters, rage like Rilgon, why is it always the rogues

Posted by Amber Teasdale in Stuff and Things on September 9, 2010

You’re not funny.  When I bring my hunter, dropping not one but BOTH of the major upgrades my paladin needs is cruel.

I hate you, please die in a fire.

No love,
-Always On The Wrong Toon

Posted by Amber Teasdale in Stuff and Things on February 18, 2010

Dear Love is in the Air,

Please go die in a fucking fire.  You plus Lunar Festival plus 25 of us in a raid plus the USS Lagship Battle = FAIL.

Nothing like spending some time grinding our gears on Lady Douchenozzle only to then run straight into…wiping on Gunship.  And not even our usual lol wiping, no, this was “I’m going to cast Flash Heal and SOMEDAY IT MIGHT ACTUALLY GO OFF oh look the tank died” wiping.  This was “Hey, it’s faster and safer for me to fall off the edge of the enemy ship than it is to try to rocket back” type wiping.  What the FUCK, Blizzard.  I should not be sp strongly reminded of the days when I ran Molten Chore with 256 megs of RAM.

I hate you with the passion as bright as a billion burning suns,
The Priest Who Was Glad She Had Bubbles

But at least it was a full 25 man BoO raid.  Not without its issues but…ALL BOO.

Red Gems Are Manufactured With Crack

Posted by Amber Teasdale in Stuff and Things on February 9, 2010

I mean, why can’t a straight strength gem be…yellow?  Or something?  There’s always one color gem that’s cheaper than the rest, shift something to THAT color so that we can, I don’t know, spread the pain?

No love,
The consumer of 200g gems that everyone else fucking wants too which is why they are never in the gbank omg

Posted by Amber Teasdale in Stuff and Things on January 26, 2010

Asking if everyone knew the fight, given that it was Oc and most people bail first chance they get, was good.  Announcing “pulling” into the silence that followed when everyone wasn’t even back on their mounts yet was silly (many other questions will be ignored, but usually a ‘ready?’ will garner a hurried response if not).  Trying to vote kick me because I suggested that you ask before pulling (again: “pulling” =/= asking or a ready check) is silly, especially as your healer is my guildmate.  You are probably not going to succeed, and the person you tried to vote kick will know about it.

Your turn!  Later today, if luck is with me, the Saurfang strat will go up.

altitis, Brought to you by sarcasm!, in which I mock people, open letters

How To Express An Opinion Without Being A Dick II

Posted by Amber Teasdale in Stuff and Things on December 2, 2009

Dear Children Masquerading As Raiders And Even Officers In My Guild,

Can you grow the fuck up?  Look, I realize that So and So has an opinion you don’t agree with.  I realize that he has all the tact of a 16 year old in the middle of an emo fit with his parents sometimes.  But that doesn’t mean that you have carte blanche to turn around and act 5, instead. You can damn well put your epeens away and cut out the snide remarks.  It doesn’t help, and it doesn’t make you look better, nevermind right.  And when two of you are officers and in the middle of a raid, you really have no fucking excuse.

Maybe said person needs to be removed from the guild, maybe he just causes too much strife because we’re not a good fit for him but, damn.  Again, not permission to act like children yourselves.   You can take your dodge/parry/stam stacking bloodshed somewhere else, and not during raid time.

-Angry Healer with the GM Hat

Amber doesnt know what the hell is wrong with you sometimes, Amber is a sad exasperated panda, Amber wants to choke a bitch, Arch Nemesis Arrens appears, derp derp, dinged up GM hat, DO NOT WANT, herding cats, Macharious is a meaniehead, Macharious is a nub, Macharious makes Amber a Sad Panda, oh children, open letters, pointed post is pointed, rage like Rilgon, rant, what is this I dont even, wtf, Zoja is a nub

Posted by Amber Teasdale in Stuff and Things on November 22, 2009

Dear Horde Of Azgalor That Keep Fucking With Me While I Camp Loque,

Fuck off and die.

Dear Rogue That I Killed Even With My Level 76 Trash Pet,

Look, I know this is a novel concept for a rogue player, but try actually sneaking up on me, okay?  Don’t drop down in FRONT OF ME, then vanish, because then I’m just like “…” and  then I kick your ass.  Also, when a hunter starts kiting you in circles it might be time to walk away.  Just saying.

See note to rogue about when a hunter starts kiting you in circles.

altitis, in which I mock people, open letters, wtf

Posted by Amber Teasdale in Stuff and Things on November 11, 2009

Just in case you thought it escaped my notice, we are watching you.

When you stand still DPSing whatevering as hard as you can and eat orb after orb on Twin Valks, we are watching you.

Why are we watching you?  Well because we are the dutiful healers players, skirting around Bad Orbs and nomming the Good Orbs so that they don’t come nom YOU, oh DPSer Player of the Other Color.   We’re paying attention.  I see you, Orb Huggers!

I see you, and I will find a way to reach through the screen some day and choke a bitch.

open letters, rant, Trial of the One Room Raid

Posted by Amber Teasdale in Stuff and Things on November 3, 2009

I know you need heals.  I see that your green bar is less green than it should be.

I know you have aggro.  There is a red outline around the square with your name in it.

I know you have stacks of the debuff on you, there’s a wee little icon with a wee little number in it on my UI.

In other words, I KNOW, SHUT THE FUCK UP, CLEAR VENT FOR SHIT WE DON’T ALREADY KNOW.

From now on, any time you say “heal me!” I will repond equally inanely with “TPS the boss!”

No love,
The person who assigned individual healers to each tank, and was assigned to you and doing nothing but heal you…no, really

This isn’t the first time I’ve written a letter just like this for you.  WTF?

Brought to you by sarcasm!, open letters, rage like Rilgon

Posted by Amber Teasdale in Stuff and Things on September 21, 2009

We are already the red headed stepchild of hunter specs.  Please do not enforce the bad stereotype by showing up to DPS a Heroic ToC with a tanking pet.  Also, “Is the paladin even holy?”  is not a constructive comment.

My darling boyfriend made it clear to me that up and coming holy paladins still struggle in 5 man content when he chucked his headset to the floor after several frustrating wipes on Paletress.  Now, Paletress can give my Ulduar geared Priestess hell if we’re lugging alts though, so I can imagine that a group filled with alts and fail pugs was…not exactly pleasant.   When we reformed a bit later with our progression MT it was magically easier.

It was also easier once someone told me I could tranq the renew off the summoned creature.  *coughsAmberisahuntardcoughs*

Some more lolepix later and he will, hopefully, not be pushed into such rages again.   It’s all about geargeargear for the freshly dinged paladin-ironic, since the heroics to GET you gear will be hard if you’re not going through with people better geared than you.  I just kind of sigh because he two healed a Naxx10 just fine but H ToC was a disaster.  Aoe Damage + Freshly Dinged Paladin = FAILZ.  :(

My dear little hunter has come along nicely-3 days after dinging I broke 3k DPS on Sapph.  I still have a lot of work to do-she needs rep for her head and shoulder enchants, a new cloak, new trinkets (lol greens), a new ring, and the rest of my gear enchanted…but I am not total fail, at least.  There is a dearth of up to date information on raiding as BM for obvious reasons, so I am doing a lot of flailing around on my own.

Lyrandre has done fine so far in her heavy SP/crit, low haste build so far.  At least, we’ve been getting through progression content with me MT healing, and I can’t ask for a better test than that.  Mim was a mess!